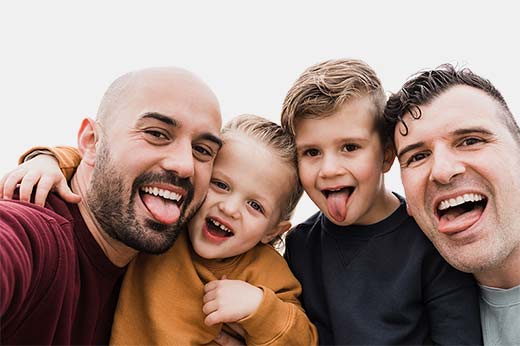 When thinking about adoption, many don’t consider the joy that can be bought from adopting sibling groups. With a national shortage of families open to adopting brothers and sisters, we have been speaking to a number of local families who have chosen this route to find out their experience, answer some of the myths that surround adopting siblings and discover any lessons learnt. Matt and Luke are a married couple and adopted their two boys who are now aged 12 and 11 way back in 2014. Read their story below.

How long since you adopted?

We adopted two brothers back in 2014, the oldest being five and the youngest 4 years old.

What made you initially want to adopt?

We are a same sex couple, and this was the easiest and most straight forward way of us having the complete family we always wanted

Did you consider siblings?

Yes. We always wanted siblings but weren't sure whether this would be possible. At panel we asked if we could be considered for siblings.

Any advice to people thinking of adopting but not considering siblings?

Simply, just do it! This was, without a doubt the best decision that we have ever made. Adopting siblings allowed us to create the family that we dreamed of all in one go.

The boys came as a pair with a joint history. We have always been open and honest about their past and their time in care, which is absolutely the right thing to do. It establishes a bond of trust, the goal being a healthy attachment between the boys and us.

They have experienced trauma in the past. To move in with us as a forever family, means they have said goodbye to birth family, friends, a home and school. We were mindful it was a very unsettling moment in their lives. A simple act such as a knock at the door from the postman could cause distress as they could think that they are being taken away again, which to us is heart-breaking.

How did you find the adoption process?

We were told that the process would be intrusive and in-depth and it certainly didn’t disappoint! However, we were aware that, as we were dealing with children's lives, it needed to be. This was fine and we know that this level of scrutiny is essential.

However, we did feel we could not adopt one child and then potentially go through such an intrusive period all over again. Our first child may feel inadequate, like we have returned to adoption as they were not enough. They would also be used to having us all to themselves and may not cope with sharing us with a new sibling.

As you can imagine, there is sibling rivalry, underpinning anything that they do with an element of competition, however they absolutely adore each other.

Our younger son idolises his older brother and they are their own support network, meaning that they always have a friend to comfort them.

One big attraction of adopting siblings is that they always have a friend to play with and keep each other occupied. My husband and I both have siblings and know the unquestionable bond that this can bring. The fact that they play with each other means that as they've got older, they don’t always need us as entertainment.

People comment saying that the boys are very lucky to have us as Dads. The truth is it is us who feel we are the lucky ones. It absolutely feels we have won the lottery. We feel so privileged to have such a wonderful pair of boys.

There is an initial honeymoon period when the boys first came to live with us. They thought we were amazing, and everything was all smiles and a bed of roses. There was then a period of adjustment where the mundane parts of life still need to be done such as teeth brushing and tidying their rooms etc. and all of a sudden we are not so popular.

We wouldn’t change anything about our family for the world and would encourage anyone to explore adopting brothers and sisters. This for us was a once in a lifetime opportunity to complete our family.

If you're thinking about adoption then we'd love to help.